The success of the ProLogue Original Six monoblock power amplifier is, since its launching in November 2005, undeniable. Elected “Product of the Year” in the USA in 2006, it has also gotten 5 major audio awards. 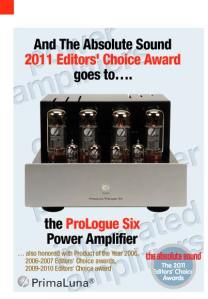 A bit more info about the ProLogue Original Six: The Absolute Sound-2006 Product of the Year Awards – January 2007 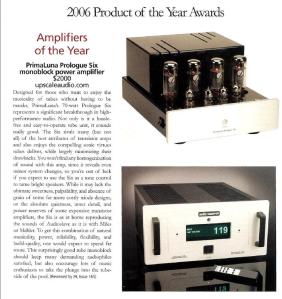 45 years of being with and in the world of high-end audio equipment. As distributor of Krell, Sonus Faber, Cello, Conrad-Johnson and many more, initiator of brands like Kiseki, Cogelco, AH!, PrimaLuna, Mystère and maybe more to follow.
View all posts by beheerder →
This entry was posted in Awards, ProLogue Original Series, Uncategorized and tagged audio, electronics, hifi, music, tube amplifier. Bookmark the permalink.

Leave a Reply to Andy May Cancel reply