Well we can resume the day in one word: busy. For a few years, CES seemed to have less visitors especially into the high-end sector; this year, it seems that it is really spinning the other way around. It is extremely busy.

We have been very busy all day, not only with American dealers, but also with international distributors: Canada, Italy, Turkey, South Korea, United Kingdom, Singapour, Malaysia, Japan, Indonesia, Australia, New Zealand, France, Germany, Austria… name it, they were all here and wanted to know about our new products, the Premium and the Classic ranges.

Some guys know how to attract the attention: check those girls from Canada, they are at the show to promote the Canadian High-End show and gosh they do it good. 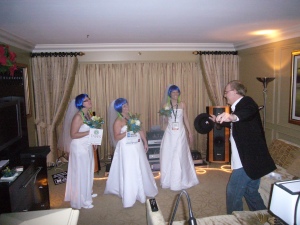 Cy dancing with the girls

Kevin getting married with the girls

At night, of course business goes on: the high end distributor family went out for a dinner at a very nice steakhouse outside the hotel. (Since our arrival on Tuesday we had not yet been outside, so it was nice to take a bit of fresh air). 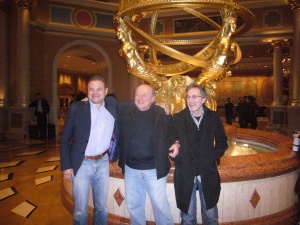 Finally we went to the hotel and we found out that there was an internet problem and that certainly this post was not through!!!!

45 years of being with and in the world of high-end audio equipment. As distributor of Krell, Sonus Faber, Cello, Conrad-Johnson and many more, initiator of brands like Kiseki, Cogelco, AH!, PrimaLuna, Mystère and maybe more to follow.
View all posts by beheerder →
This entry was posted in CES Las Vegas 2011, Shows and tagged audio, electronics, hifi, music, tube amplifier. Bookmark the permalink.